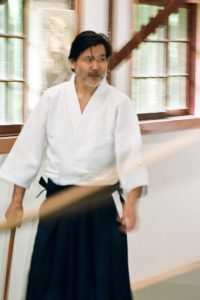 Sugano Sensei teaching weapons at a seminar in Woodstock, NY.

At the beginning, I didn’t get him. His aikido was different, so different from what I had seen in those early years practicing aikido. And I had barely heard of him. When I took my first class with him, I was there, at the New York Aikikai, to train as an uchi-deshi under Yamada Sensei. Oh, how things changed in those two months.

Seiichi Sugano Sensei was born in Otaru, Hokkaido on December 17th, 1939.  He studied judo since he was 12 years old, but left it after starting aikido in 1957. He became an uchideshi at Hombu dojo and trained under O’ Sensei until 1965 when he left japan for Australia. It’s interesting how so many bios refer to this, and other changes of residence (to Belgium later, and New York at the end), as if he was dispatched by Hombu dojo. He told us once that he had gone to Australia for personal reasons. He had met an Australian woman, who later become his wife and mother to his two children.

Sugano Sensei taught aikido as an evolving subject. He challenged himself constantly, never happy to achieve any level of knowledge or dexterity. In his sixties, he started fencing. I met one of his aikido students who actually met him in fencing. He said that there is a lot of aggressive talking in fencing as a way to intimidate or distract your opponent. He saw these 20 or 30 year-olds screaming at this beginner, who was twice their age, and who, unbeknownst to them, was already a top level master in a martial art. I’m sure he could have disarmed them and break their arms if he wanted to. But he was humble and thirsty for bettering himself and had no problem being a beginner again.

This constant search to challenge himself is what made him have an incredible response to losing a foot to a rapid infection from a flesh eating bacteria. It was 2003. In the hospital they did not tend to him as quickly as he needed. His toe was infected, and soon enough his foot was already compromised. They operated and had to amputate above his ankle. Those were sad moments and devastating news to the Aikido community and everybody who new and loved him. The whole episode turned critical. He had lost a foot but he was still alive. Still alive. It turned that serious.

We went to see him at the hospital; my wife, our son, and I. Mateo was almost 3 years old. Sugano Sensei met him when he was a newborn and would see him frequently, as we brought him to the dojo when we trained. Mateo brought a “Blue’s Clues” band aid, as he was obsessed with the show, and gave it to him. “For you Sensei, so you feel better.” Sensei took the band-aid and saved it in a small book he had with him.

When Sugano Sensei came back to the mat, to teach a weapons seminar at Aikido of Woodstock, my wife and I had the very good fortune of driving him from Manhattan. It had been only 14 weeks or so after the amputation of his leg. Sensei was eager to get on the mat. Teaching weapons was a good compromise, since he wouldn’t have to exert too much pressure on his wound. After teaching a great class, always in his no-kata format, he called somebody for ukemi and demonstrated shomenuchi irimi nage. That was the last technique and the only open hand technique.

While I was carrying his bags to the car to drive him back I asked Sensei why from all the techniques he chose to demonstrate shomenuchi irimi nage. His response: “It’s the essence, no?” Later on I realized how important this technique was for him. He would teach it in every class. He would ask for it in all tests, even to the dismay of kyu deshis who didn’t have the technique as part of their test. 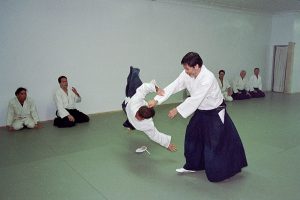 After the amputation, he would wear ballet shoes on the mat. Sometimes one will fly out of his foot while demonstrating. But, as he got more comfortable with the prosthesis, he would start disappearing again every time you had to attack him for a demonstration. He had told us that before the amputation he was searching for a new challenge that would allow him to grow. Losing his foot turned out to be that challenge. And he took it head on. Committed to move forward. The way he moved on the mat, it was hard to notice he had a prosthesis. David Reinfeld said that he had a bionic foot. 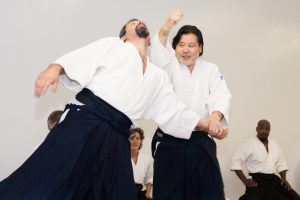 We got used to our bionic Sensei. He would teach better than always, and he would be smiling and ready to share with us any details regarding his foot. It was hard to complain about feeling tired or trying to find excuses not to go to class. If Sugano Sensei was on the mat, what was your excuse?

In 2007, Yamada Sensei asked me to test for nidan. I was honored by this; but, I had a problem. I would be traveling to Peru during the Christmas Seminar, which is when the dan tests are offered. I spoke with Yamada Sensei, thinking that he would ask me to go to Winter Camp or Montreal for the test. He thought about it and said “Do it with the kyu tests. Talk to Sugano Sensei.” It was Sugano Sensei who would preside over the kyu tests. So I spoke with him and he said it was OK.

After all the kyu tests, he called my name for the nidan test. A test that would have lasted three minutes during the Christmas Seminar, lasted 15 minutes with Sugano Sensei. He asked me to do everything. It started with suwari waza and ended with suwari waza. I did weapons and did the randori. And, I did iriminage. I was glad that I had the chance to take that test with him. My nidan was special that way.

In 2010, Sensei was suffering from health problems, derived from his diabetes. He was in the hospital for some time. This time the prognosis was not good. He died on August 29th. He was 70 years old. We miss him terribly.

Aikido is a way:
There is commitment and there is obligation.
Do not abuse or misuse the art of Aikido.
Study carefully, honestly and humbly.
Respect your seniors and look after your juniors ”
Seiichi Sugano Sensei (1939 – 2010)